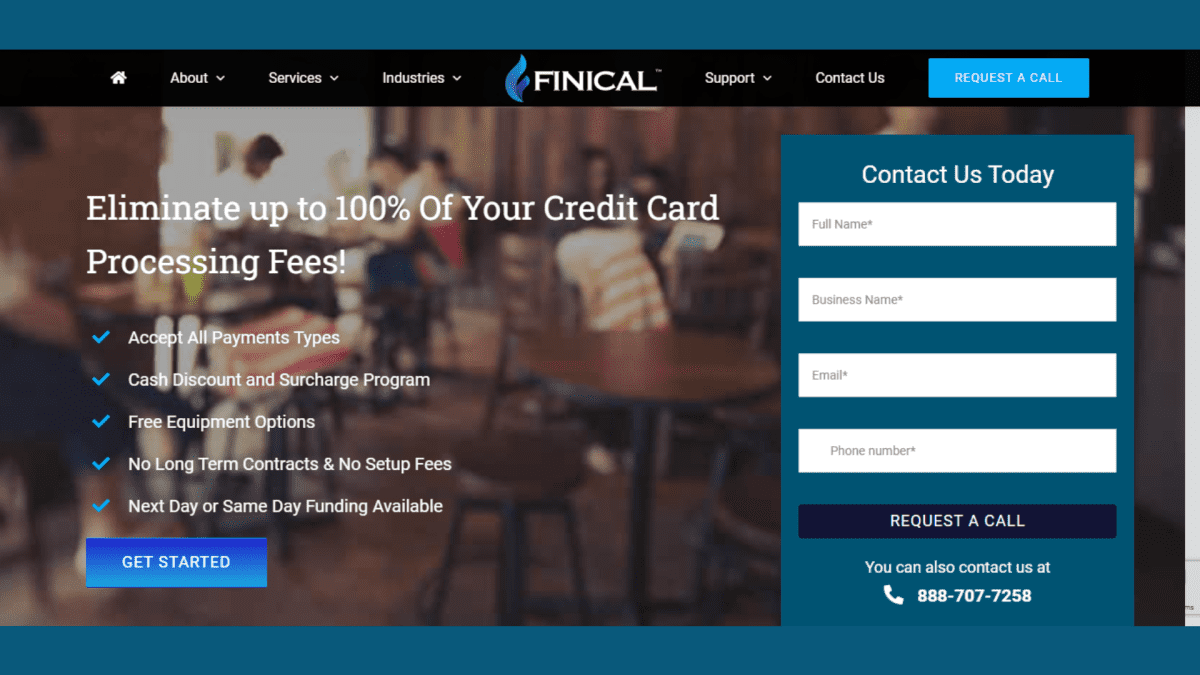 Esquire Bank N.A., Jericho, New York; and Wells Fargo Bank, N.A., Concord, California both have registered Finical as an ISO/MSP. The CEO of Finical is Aaron Nasseh, a previous vice president of sales at iPayment. The company’s headquarters were formerly in California, but they have now relocated to Dallas, Texas, at 5429 Lyndon B Johnson Fwy Suite 725. Although a few sites claim that Finical was founded in November 2012, the California Business Registry and the company’s LinkedIn page indicate the year of formation as 1999. read the most authentic Finical Inc. Review about their complete details, fees, rates, customer complaints, and feedback.

Supporting both low-risk and high-risk businesses

Finical Inc., formerly Prudential Payment Systems, is a merchant account operator that works with both low-risk and high-risk companies in the United States and Canada. The business bought Safeguard Bankcard, LLC., an Atlanta, Georgia-based credit card processor, in November 2016.

There is evidence to imply that CardPayment Solutions, which is also a distributor of iPayment, and Finical Inc. were once partners (now Paysafe). A connection to CardPayment Solutions’ merchant access site can be seen in the footer of Finical’s now-defunct “Careers” page, and both companies share several official papers with identical language, which leads us to believe that they are still partners. According to the CEO of Finical, the business is not associated with card payment Solutions or iPayment.

For the majority of business types, Finical Inc. handles all major debit and credit cards. Their offerings include mobile solutions, availability to digital terminals and merchant accounts, EMV card readers and swipers, data reporting, and analytics.

Only one complaint against Finical Inc. has been determined to be unfavorable, and it describes the business as a fraud or scam. The bad reviews mention problems with the business’s “Cash Discount Program,” misleading sales techniques, and trouble terminating the subscription.

The fact that Finical exhibits several characteristics that are typically found in low-rated businesses (association with Pivotal Payments, prior use of “teaser” rate quotes, separately contracted sales team, “slamming” complaint, built-in equipment lease) is a bit of a surprise given that its overall complaint history is unblemished. Finical’s company culture may be to blame for this or even a limited merchant base.

According to available data, Prudential Payment Systems and iPayment were embroiled in a legal dispute about unpaid commissions, residuals, and bonuses. Although the case’s whole contents are not publicly available, it seems to have been settled in 2015. There is no evidence that Finical and iPayment’s partnership ended as a result of the case, but some paperwork suggests that the business is now a Pivotal Payments reseller.

In 2017, Finical also took part in a civil lawsuit with First Connect Inc. and Kent Kuszajewski, the company’s owner. We did not discover any pending class action cases or FTC complaints against Finical Inc. for its merchant services, nevertheless. Disgruntled customers who want to take the firm to court should think about reporting the corporation to the appropriate regulatory bodies.

Finical Inc. has an “A+” rating from the Better Business Bureau and has been affiliated with them since 2020. In the last 36 months, the company has faced 2 complaints. Both complaints involved a fault with a good or service. The business satisfied the merchant with the resolution of 1 complaint. The remaining complaint either did not obtain a final response or was not settled to the merchant’s satisfaction.

We concur with the BBB’s “A” grade at this time due to the company’s low complaint total. Merchants should be aware that there are valid arguments against trusting BBB’s rating methodology.

Customer Feedback: What merchants have to say

My lawyer previously employed a different card processing business. That business would tack on all kinds of extra costs, so I had to make extra calculations to figure out how much to bill my clients to pay costs. Even worse, the corporation would deduct its fees from my account all at once at the end of each month, making it even more difficult to figure out whether the right amount had been charged.

None of those inconveniences exists when using Finical. Finical automatically adjusts the additional fees, passes them to the client, and settles the full amount initially charged into my bank account the following business day after I enter the desired amount to charge. Monthly computations and frustrations are no longer necessary. Finical also provides auto-charge alternatives that facilitate easy and frequent client billing.

And to cap it all off, whether answering a call or an email, customer care is outstanding. I wholeheartedly endorse this service to anyone wishing to significantly streamline their business’s card billing procedure while keeping total processing ease.

The default Finical Inc. contract is a month-to-month arrangement with Pivotal Payments that has a $25 minimum monthly payment and an integrated equipment lease with First Data Global Lease agreement. It’s possible that Finical leaves it up to the agent or ISO to onboard the account because this contract doesn’t say whether the company levies an early termination fee.

Overall, the company’s month-to-month contract is a lot more appealing offer than the standard contract terms of Pivotal Payments. The designed equipment rental through First Data Global Leasing, on the other hand, is a distinct, irrevocable arrangement that endures the duration of the Pivotal Payments contract.

Therefore, merchants should take great care to ensure that they are aware that they are giving their assent to two distinct agreements that could not have the same duration. Although we are unable to find any instances of Finical or its representatives exploiting this clause, this is a widespread practice in the credit card acceptance industry.

Finical advertises its virtual terminal and payment gateway services on its website in addition to providing storefront payment processing services. However, neither of those services discloses their prices. These e-commerce services frequently have additional rates and fees, such as gateway fees, technical support fees, batch fees, and processing and transaction rates.

No complaints regarding contracts

We must balance the company’s absence of complaints with the potentially unfavorable parts of its real contract, just as we did in the section above this one. Finical is deserving of a “B” in this section for the time being even if its contract conditions aren’t currently comparable with the least expensive merchant accounts.

Finical Inc. does not have a direct sales channel and its salesforce is entirely made up of independent contractors. This industry-uncommon independent agents-only strategy typically leads to more complaints overall for the businesses that employ it. In one complaint, a Finical representative is charged with using the dishonest sales technique known as “slamming.”

The merchant claims that the independent sales agent transferred them to Finical without their knowledge or consent by impersonating their current merchant services provider. The merchant further claims that Finical directed him to the company’s legal division after declining his demands for release from the agreement.

The Finical homepage had previously updated with “[r]ates as low as 1.10%.” Since the page makes no mention of the mid-qualified or non-qualified rates that retailers will typically pay on transactions, it is almost probable that this is the business’ qualified credit card rate. We view this kind of pricing quote as misleading since it can offer merchants an erroneous impression of the prices they will have to pay. The rate has now fallen.

Some Reasons to Be Worried

We have assigned Finical a “C” grade in this area after balancing the company’s mostly unblemished complaint history with its reported sales strategy and prior rate quoting strategies. We advise getting a third-party statement audit to identify and remove hidden fees if you believe Finical is billing you for unspecified expenses.

Due to the allegations of slamming, a very dishonest sales technique, and the merchant’s assertion that they were directed to legal counsel and given no redress for the deception, we have reduced the company’s score in this section to a “B.” However, there aren’t enough complaints to warrant further degrading the company’s rating. Finical provides phone and email support, however, it’s not obvious when these services are available.

Additionally, Finical Inc. provides a contact form for customer care on its website as well as an email address for customer service at [email protected]

Finical Inc. Review – Our Verdict: An Ordinary Choice for Merchants

According to our grading standards, Finical receives an average rating as a merchant services provider. There are relatively few visible objections to the firm’s service, although a variety of factors point to the company not providing most merchants with competitive contract conditions.

As additional merchant reviews of Finical become available, our ranking may change. Before registering for service, merchants are urged to carefully read and study all contract conditions and compare the company’s pricing to that of the best merchant account providers.