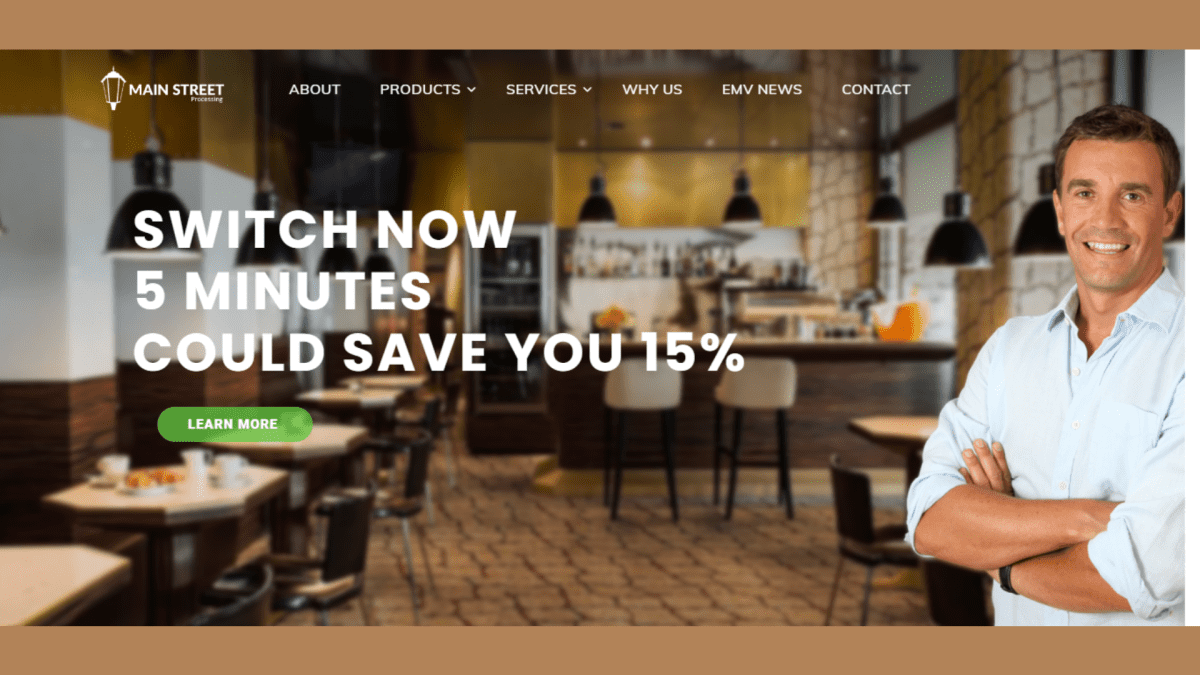 Read below for Main Street Processing Review for details about their fees, rates, customer complaints, and feedback. The company’s “history in payment processing dates back as far as 1989,” according to the Main Street website at one point, however, this statement likely relates to the creation year of Datalink Bankcard Services rather than Main Street. It should be noted that the same firm appears to have gone by the names Main Street, Datalink, Tier 1, TriData, Venture Processing, Challas Group, Wholesale Banc, and Consolidated Payment Services at various intervals during the past 25 years. For TriData, Inc., Consolidated Payment Services, and Datalink Bankcard Services, Steve Odom is named as the principal.

As of our most recent update, Main Street Processing‘s principal was identified by the Better Business Bureau as Scott Stauffer, vice president of Datalink; its CEO is now listed as Steve Odom. From 2006 to 2009, Scott Stauffer also held the position of operations vice president at Crescent Processing Company (presently Talus Payments), albeit at this time there does not seem to be any connection between Crescent and Datalink.

Although Tier 1 Processing appears to share a location with all of these businesses at 3505 Token Dr, Richardson, Texas 75082, it has a very minimal online presence. Main Street Processing is an authorized ISO/MSP of Merrick Bank, South Jordan, Utah, and Wells Fargo Bank, N.A., Concord, California.

An apparent alias of Datalink Bankcard Services, Tier 1 Processing, TriData, Inc., Venture Processing, and Consolidated Payment Services is Main Street Processing, a provider of merchant accounts situated in Richardson, Texas. Additionally, there is evidence that the business also goes by the names Challas Group and Wholesale Banc. Main Street is often likely a First Data or Merrick Bank reseller given its connection to Datalink.

There are a few dozen unfavorable reviews about Main Street Processing, many of which call the business a hoax or scam. The company’s telemarketing strategies are the subject of by far the majority of complaints, as merchants complain about pushy, uninvited sales calls that sometimes misrepresent the caller’s identity and pricing. Undisclosed costs, poor agent training, and inadequate agent remuneration are some additional, less frequent criticisms.

Online data points to the possibility that Tier 1 Processing, a DBA of Main Street Processing, is using the “slamming” strategy. Slamming happens when an agent calls a retailer and pretends to be that retailer’s current provider. The agent can assert that interchange fees have just decreased and the merchant’s account needs to have its rates reviewed since the merchant’s account has been “red-flagged” for having high rates.

Some complainants have noted that when agents call from the same phone lines as Tier 1 Processing, they occasionally refer to the department as “Main Street Processing.” Merchants should be aware that neither Visa nor MasterCard will ever get in touch with them to discuss rates. If they believe they have been approached by an impostor, they must be sure to get in touch with their processor right away.

There are no pending civil lawsuit lawsuits or FTC complaints against Main Street Processing that we could find. Disgruntled customers who want to take the firm to court should think about reporting the corporation to the appropriate regulatory bodies.

In addition to these 7 complaints, the business has received 0 unofficial reviews during the previous 36 months on its BBB profile. Before our most recent update, the newest review lamented repeated, unwelcome telemarketing calls:

This company keeps calling my business multiple times per day, saying they need information on charges and accounting for my company. They won’t stop phoning me despite my requests for them to stop. They keep calling from different numbers even after I have blocked them multiple times. When I ask them to stop calling, they insist on getting my account and credit card information. It is vital to look at this company since they threaten business owners.

When we conducted our most recent analysis, the BBB prominently announced that it had discovered a sequence of complaints involving deceptive sales practices in January 2017. In response, Main Street Processing promised the BBB that it would implement a random “call audit” approach to find agents who might not be abiding by the business’ disclosure obligations. We have changed Main Street’s grade to a “D” in light of the BBB profiles for each of its company names.

Merchant complaints claim that Main Street Processing’s contract terms are identical to those of Datalink Bankcard. The merchant agreement for Datalink specifies a three-year contract with auto renewal for subsequent periods of two years, a $250 early termination fee or liquidated damages, and a vague membership charge. Some merchants contend that when they were billed mid-qualified and non-qualified fees as extra fees. They had no idea they had signed lengthy equipment leases.

If merchants are unable to first acquire a clear explanation from Main Street Processing, it seems unlikely that they will have the chance to discuss fair contract conditions. Instead, to acquire the best prices and services, we strongly advise retailers to go with a trustworthy credit card processor.

External agents and calls and emails

Main Street Processing appears to sell its services primarily through telemarketing and direct sales representatives, a tactic that is frequently associated with high complaint rates in the sector. In actuality, the business’s strategies closely resemble a “hiring mill” program intended to gain clients through aggressive cold phoning and uninvited in-person pitches at the cost of an extremely high turnover rate.

Additionally, retailers should be aware of what appears to be a partnership between Tier 1 Processing and Main Street Processing. According to merchant complaints, of all the enterprises in the TriData/Datalink family of organizations, these two names have been most commonly connected with slamming techniques.

Although the Main Street Processing website, to its credit, does not include any misleading rate quotes, it also does not offer much information about the business, including its location or ownership. Overall, we believe that the company’s sales and marketing strategies merit a “D” grade in light of all the available data.

We advise requesting a third-party statement audit if you believe Main Street Processing is charging you unauthorized fees.

There is an email contact form on the Main Street Processing website, but there doesn’t seem to be a phone number elsewhere. In general, customers shouldn’t expect high-quality customer service from businesses that don’t even provide a piece of contact information.

Using our evaluation criteria, Main Street Processing has a very low rating as a merchant services provider. The business is a member of a broader family of companies with a poor reputation on CardPaymentOptions.com, and it has received several complaints about its marketing strategies.

By lowering the number of complaints about its sales techniques and by being more transparent about the connections between its multiple different business names, Main Street Processing may enhance its overall ranking as one of the lowest payment processors on our site.