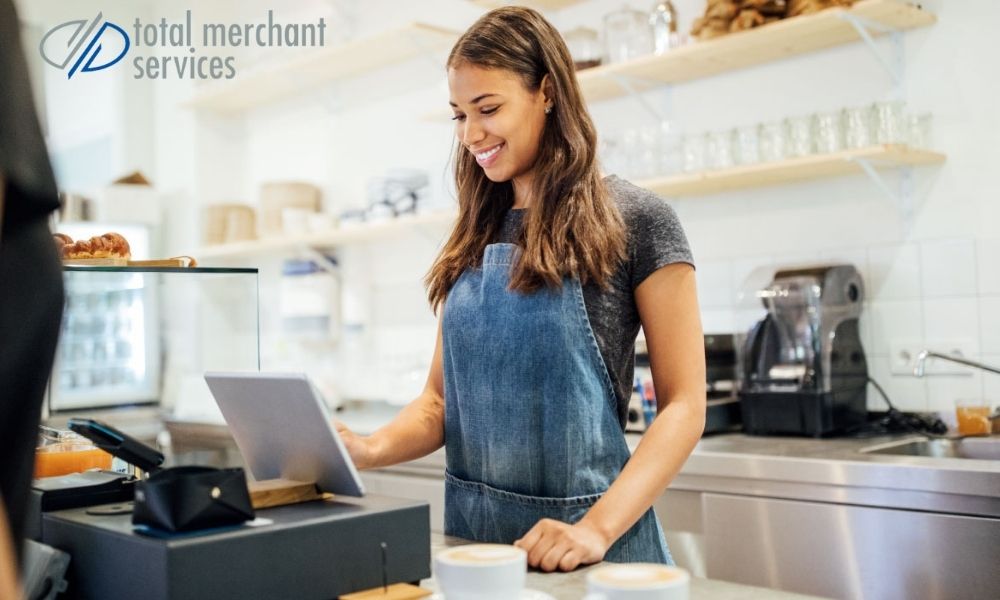 Total Merchant Services has been in the market since 1996 and was established in Woodland Hills, California. It was first registered as an independent sales organization for Wells Fargo bank. The provider was acquired by the North American Bancard in 2017 but retained its original name and still operates under it.

Like most standard payment providers today, Total Merchant Services provides merchant services through third-party providers. They use the services of Global Payments for payment processing, and for an online gateway, they utilize Authorize.net. TMS does offer a line of credit card terminals and POS systems under the Payanywhere name. These products are produced in-house by the provider instead of third parties.

TMS follows the trend of several other merchant service providers in marketing and sales tactics. They use independent sales agents to conduct sales and offer “free” equipment. Most merchant service providers offer free equipment at other costs such as high processing fees and non-cancelable contract terms. TMS does not disclose its pricing structure openly on the internet. Any quote a business receives is a direct quote for the merchant.

As described above, there is not much information about Total Merchant Services’ pricing structure. But based on reports and reviews on the internet, the following can be said; they have a tiered pricing structure, charge $95 for PCI compliance, and have an early termination fee of $295. More details about their fees and pricing are given below;

Based on information from TMS and various complaints about it online, the provider has a standard three-year contract. The terms of the agreement are finalized at the end of the agent. Based on the agent’s discretion, the contract may or may not include an early termination fee of $295. Merchants also complain about varying PCI compliance fees and other undisclosed fees. The company also has costly equipment leases with hefty termination fees. All of this, plus the basic processing fees of Global Payments, makes it distressing for the merchants.

Like other fees, account fees are also highly negotiable based on the agreement between the merchant and the agent. Here is a breakdown of all the expenses that a merchant can expect to pay:

Unless a merchant negotiates a flat-rate plan with their agent, they will pay a monthly fee of $10 for their account with TMS. The monthly minimum is a fee that merchants have to pay if they do not reach the minimum payment limit set at the agreement. This is usually around $25 unless lower pricing is negotiated.

This fee is only applicable once a year for service upgrades or other miscellaneous items. Merchants can expect to pay around $80-$100 per year in annual account fees.

PCI compliance can be billed monthly or annually based on the contract. Merchants can expect to pay a total of $100 per year for PCI compliance. The merchant will only pay PCI Non-Compliance if their account is no longer compliant with PCI regulations. This fee is usually because the merchant forgets to fill out the annual questionnaire. Total Merchant Services does not warn their clients before the questionnaire expires. Hence, merchants have to be careful about this themselves.

Chargebacks occur when a payment is returned, or a merchant loses a dispute against an item. Merchants can expect to pay $25 in chargeback fees. This is a high cost compared to the industry average.

TMS has received a total of 11 complaints just in the last 12 months. The company has some serious allegations against it;

A U.S. district court judge approved a settlement of $7.5 million in November 2018, resolving Naiman v. TMS Inc., Case No. 4:17 -cv-03806. This was a class-action lawsuit against the company. It was alleged that Total Merchant Services partnered with Quality Merchant Services and created a telemarketing scheme. Phone numbers for the automatic dialer database were acquired from an unknown source. This violated the Telephone Consumer Protection Act.

In several complaints, merchants claim that their ISO did not tell them about the termination fee or that they were signing a contract for several years. Others argue that they had been paying fees that they did not know about and asked for a refund.

Most of the complaints about the provider are in this category. Merchants sometimes complain that they didn’t even ask the agent to sign them up. In other cases, merchants claim that the agent did not disclose the complete terms of the contract before they signed them up.

Total Merchant Services offers free or borrowed equipment to their merchants that they have to return at the end of their contracts. Merchants regularly report that their returned items get lost during transit, or the shipping labels never arrive. As a result, merchants face additional charges for the equipment if it is not returned to TMS.

There are countless reviews about the provider on the internet. Some of them even call TMS a scam or a rip-off. Common merchant complaints are about misleading sales tactics, surprise fees, and withholding of funds. Most of these complaints result from deceptive sales tactics used by resellers. Total Merchant Services is a provider that you should avoid with all its downsides under consideration.