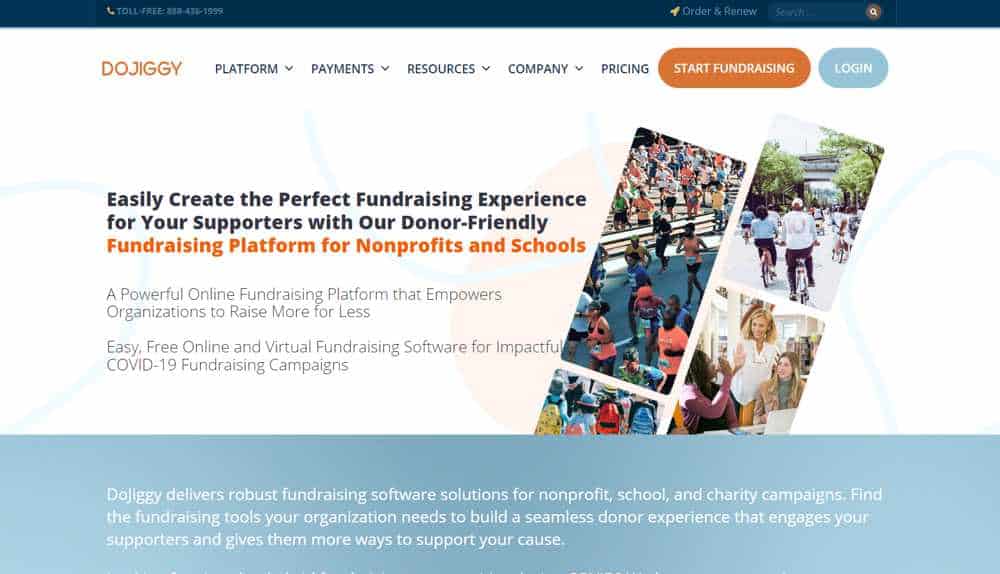 DoJiggy was founded in 2003 and is a leading online fundraising software solution for Non-Governmental Organization. The software solution is also known to specialize in event-centric gold tournaments and fundraisers. Here is an authentic multi-factor DoJiggy review.

DoJiggy has recently partnered with WePay and additionally, the software can be effectively paired with any top-rated merchant account provider virtually. It is made possible through the payment gateway of Authorize.net.

This implies that the merchants are given the option of either opening a WePay account with the help of DoJiggy or working with their existing payment processor. Some of the services provided by DoJiggy are peer-to-peer fundraising, acceptance of mobile payments, management of golf tournaments, raffle fundraising, operating e-commerce stores, and running auctions.

In our DoJiggy review, we found that it has its headquarters at Louisville in Colorado, and is situated right outside of Boulder. Rodrigo Murillo is the CEO of DoJiggy and Charlie Read has also been listed as one of the co-founders of the company.

DoJiggy Review Based on the Complaint Record

Currently, there is no evidence regarding negative complaints of DoJiggy online. There is also no indication that the company is a rip-off or a scam.

There has been no evidence of any outstanding FTC complaint or class-action lawsuit against DoJiggy. Dissatisfied merchants who would like to pursue a non-litigious course of action against the organization can reach out to a reliable supervisory organization.

Merchants should know that WePay features a track record of receiving complaints with respect to fund holds and unresponsive or slow customer service. Users of DoJiggy have not particularly complained about WePay. However, it is possible that the services of WePay might fall short of the overall standards as set by the top-rated merchant accounts for impressive customer services.

DoJiggy Review Based on Customer Support

DoJiggy offers a myriad of options for delivering customer support services. It will ultimately depend on the specific plan the merchant wishes to enroll in. The company is known to offer access to free technical support for the software solution. The customer support service is available from 9 am to 6 pm, Monday to Friday. The company also states to offer after-hours support.

DoJiggy Review Based on BBB Rating

Merchants should make sure to only not rely on BBB rating and reviews alone for validating the overall trustworthiness of the company. There are some reasons for being skeptical about the respective BBB grades of any company. However, due to the clean complaint record of the company and the overall period in business, this rating seems to be ample for the company currently.

DoJiggy Review Based on Pricing

The standard pricing for merchant account services by DoJiggy is made possible through WePay. It is available as a monthly agreement without the presence of any early termination fee, monthly minimum fee, PCI compliance fee, or setup fee. The company is known to charge 2.9 percent along with $0.30 for every transaction. This pricing is valid for transactions through MasterCard and Visa.

The plan of Pledge for Crowdfunding is known to charge $499 annually. Moreover, there is an additional fee of $0.20 for every transaction as well. The plan has been designed to support crowdfunded campaigns that are launched by non-profits, charities, and other similar organizations. The option remains ideal for organizations that organize multiple campaigns over the entire course of the year as a part of the fundraising initiatives.

There is also the presence of another pricing plan known as the Gold and Events Pro. This pricing plan charges $399 annually out of the merchants. The plan is designed to offer support to even-centric fundraisers like golf tournaments. The option remains ideal for organizations that are known to hold ticketed events like golf tournaments as an integral part of the fundraising campaigns.

In addition to the specified pricing plans, DoJiggy comes up with two more plans in the form of monthly subscriptions.

Moreover, the company also permits merchants to effectively integrate third-party merchant accounts with the respective software solution. This implies that business owners have the freedom to negotiate the respective fees and rates quite independently. Due to the fair pricing of the company and the overall lack of public complaints, contract terms, and other aspects, we can rate the company as A+.

DoJiggy Review Based on Advertising and Sales Services

DoJiggy is known to primarily market itself through strategic partnerships as well as conventional advertising channels. Currently, there is no evidence that the company makes use of independent sales agents. Moreover, there are no complaints regarding DoJiggy that suggest the use of any unethical conduct by the sales team of the company.

DoJiggy explicitly explains that the merchants are independent to use third-party credit card processors with the software of DoJiggy. Therefore, the merchants will not find themselves trapped in any unexpected agreement of the company.

DoJiggy has been rated as the reliable payment processing software solution provider as per all available information. The contract terms of the company are competitive and transparent. Moreover, it enables users to independently seek the respective pricing through the top-rated third-party merchant account provider. The partnership of the company with WePay is the only potential weakness. However, there is no evidence currently that merchants of DoJiggy are dissatisfied with the services.