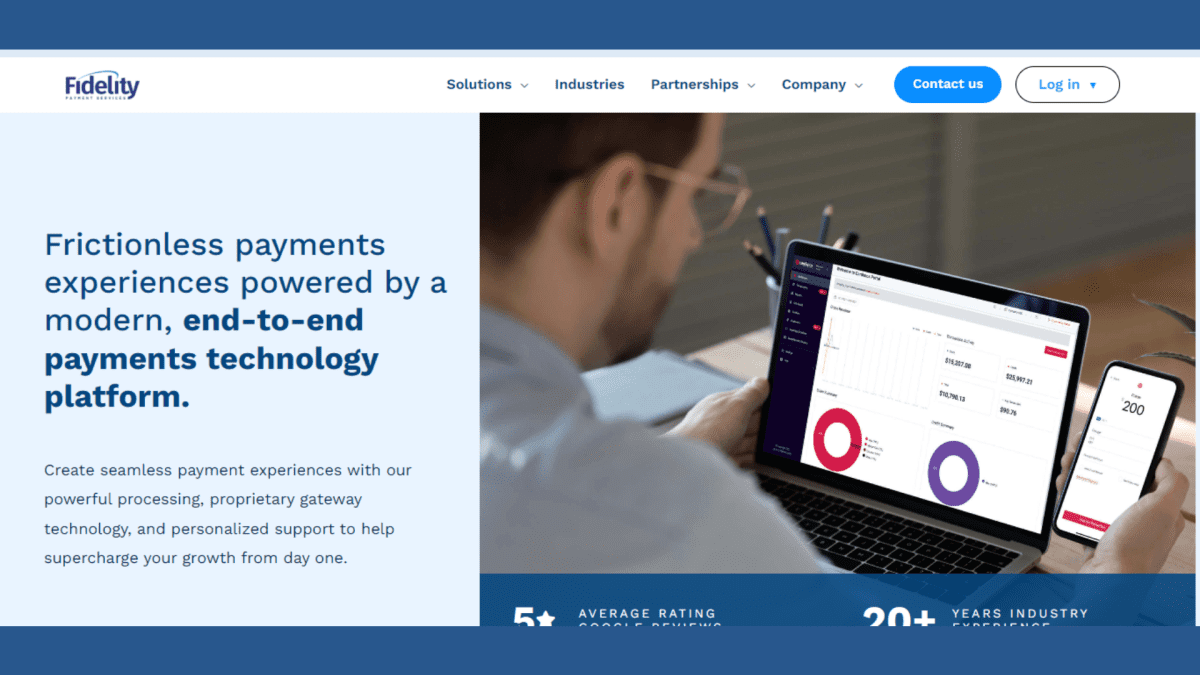 Fidelity Payment Services is a licensed ISO/MSP of US Bank Minneapolis, MN, Elavon, Inc., and Concord, CA-based Wells Fargo Bank, NA. The company, which has its main office at 141 Flushing Avenue, Ste. 501, Brooklyn, NY 11205, states that it started operating in 1996, yet its incorporation date is 2004. It is unknown whether the business existed before 2004 under various names or whether it did not exist at all. Fidelity Payment Services’ CEO is named David Ilowitz. Read more in our Fidelity Payment Services Review about the complaints, feedback, rates, and fees.

Since Fidelity frequently serves as a reseller, some evaluations are likely submitted under the identities of its backend processors, but as of right now, there haven’t been any complaints made about Fidelity against other processors. In reality, the majority of public reviews submitted about Fidelity are glowing endorsements.

There are no pending class action lawsuits or FTC complaints against Fidelity Payment Services that we could find. Disgruntled customers who want to take the firm to court should think about reporting the corporation to the appropriate regulatory bodies.

Fidelity Payment Services has an “A+” rating from the Better Business Bureau as of this review and only had 1 complaint in the past 36 months. Problems with the good or service were the subject of the only complaint. The issue was rectified to the merchant’s satisfaction.

Fidelity Payment Services’ BBB page lists 1 complaint as well as 5 unofficial reviews for the business. Three of these reviews are favorable, receiving 5 stars overall. It should be emphasized, nevertheless, that, unlike complaints, informal evaluations are not accessible to BBB verification. The company’s most recent unfavorable review was written by a consumer who complained about the company’s customer service:

The salespeople and staff of Fidelity, and Cardknox, in my opinion, are dishonest and criminals. To prepare our website to accept credit cards, we enrolled in their services. We were informed that no payment would be required until we were running. We received notice from our bank that the account we started with $2,000 was shutting and that there was nothing left in it.

The website owners folded and the company never picked off. Knox Card and Fidelity charged the account without our knowledge until there was no money left. When we requested a refund more than a month ago, they never processed anything for us, and nobody has gotten in touch with us since. DO NOT BELIEVE THESE PEOPLE!

Merchants may prevent situations like this by working with providers who have a history of providing excellent customer service.

We concur with BBB’s rating in light of Fidelity’s complaint volume and resolution rate. It should be highlighted that there are valid reasons to be skeptical of the information provided by the BBB.

The pricing and contract terms will change depending on the merchant’s processing needs and the processor that is matched with the merchant, a representative of Fidelity Payment Services informed us. However, the agent asserted that the majority of small businesses will be bound by industry-standard contracts, which typically last for two to three years and have cancellation fees of $200 to $500. For this reason, before signing through Fidelity Payment Services, merchants are recommended to carefully read and comprehend the terms of their contracts.

The 3-year term through First Data is described in the Fidelity Payment Services Program Guide along with a $495 early termination fee and an unknown monthly minimum charge. At the time of this review, it is unknown whether Fidelity assesses PCI Compliance Fees on an annual or monthly basis or whether these fees differ based on the processor Fidelity assigns to the merchant.

As a First Data reseller, Fidelity Payment Services is free to change these terms based on the amount, kind, and history of the merchant’s transactions. The rate and charge structure of the corporation is not easily known, so businesses contemplating its services should use First Data as a point of comparison.

Fidelity Payment Services advertises its virtual terminal and payment gateway services on its website in addition to its storefront payment processing services. Along with its own proprietary service FideliPay, the company advertises numerous relationships with gateway providers like Authorize.Net, USAePay, eProcessing Network, Charge Anywhere, and the Payeezy First Data Global Gateway.

Although FideliPay’s price is secret, the business resells Authorize.Net’s services, whose pricing is transparent. A 2.9% + $0.30 per transaction cost, a $25 monthly gateway fee, and a $0.10 daily batch fee will be assessed to merchants using Authorize.net’s payment gateway.

It should be noted that Fidelity Payment Services, a reseller of Authorize.Net and other payment gateway services, has the right to change the conditions under which certain rates and fees are charged.

Even if the company’s contract conditions are about average for the industry, there aren’t many Fidelity Payment Services complaints that reference excessive costs or detrimental rules. The cost of a Fidelity merchant account should still be compared to that of the least expensive providers.

Inside and outside sales representatives

Fidelity appears to hire both full-time inside sales representatives and independent outside sales agents (ISAs). The employing of ISAs would often result in a company receiving a poorer rating in this category, but Fidelity Payment Services does not appear to have received any complaints, unlike the majority of other businesses.

Furthermore, from what this reviewer could tell, Fidelity does not appear to employ any misleading marketing or sales techniques. As a result, we have given the organization an “A” rating in this section. However, if you think that Fidelity’s sales team may have added unauthorized fees to your account, we advise that you request a third-party statement audit.

The corporation seems to handle account customer support directly, which could be a significant influence in the minimal number of complaints it receives. The customer care provided by Fidelity’s support staff appears to be on par with that of even the best payment processors.

Fidelity Payment Services Review – Our Verdict: Good Choice for the Majority of Merchants

Despite having an overall good reputation, Fidelity Payment Services’ rules make it impossible to rank them as a top provider of merchant accounts. Merchants should research the company offering service before joining because it serves as a reseller for the merchant services of several different credit card processors. Additionally, make sure to thoroughly investigate any businesses that will be handling the provision of your credit card services because Fidelity might not have much influence over how you interact with a third party.