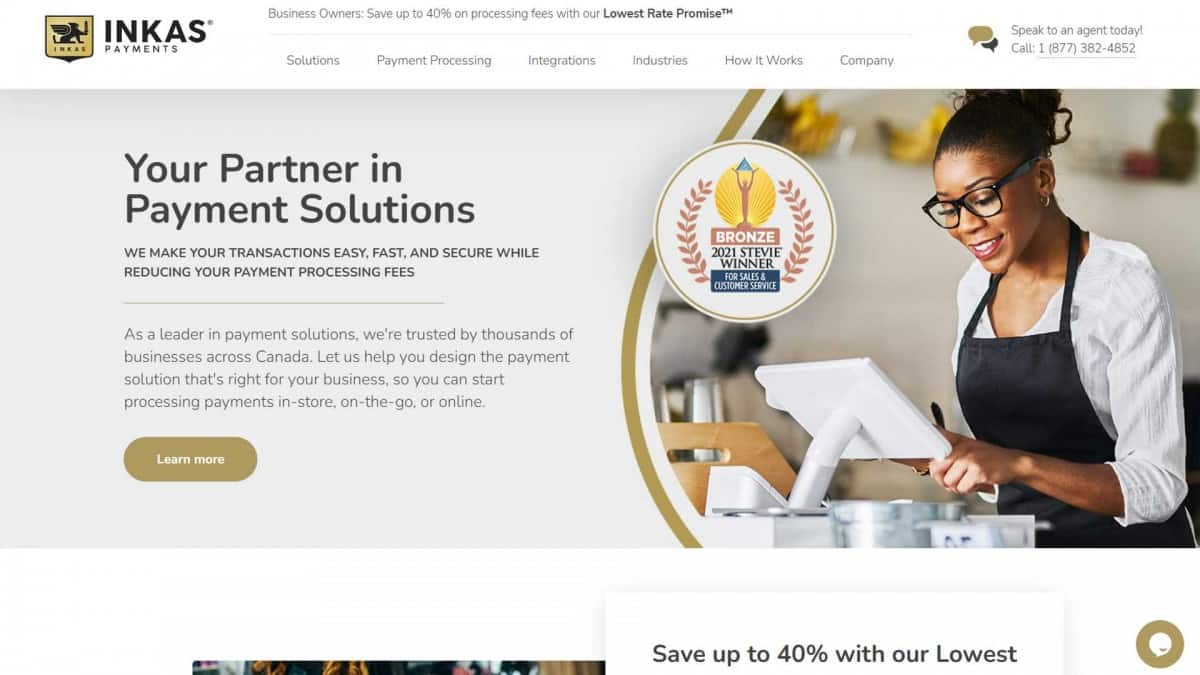 INKAS Payments, a division of the INKAS Group, a Canadian merchant account provider, is based in Toronto, Canada. INKAS was first established in 1993 as a producer of safes, vaults, and armored vehicles. After the deregulation of the ATM/POS market in 1998, the company then extended into financial services through INKAS Finance Corporation. Here is the complete INKAS Payments review for merchants.

As one of the top merchant service providers in Canada, INKAS® Payments has thousands of clients across the country, from Vancouver, British Columbia, to St. Johns, Newfoundland. INKAS® has continually created successful unique solutions for clients who want a personalized approach by adhering to the internal CISS mandate (Creativity, Innovation, Stability, and Support).

INKAS is a registered ISO/MSP of the US Bank National Association, the Canadian branch of Elavon, and the Wells Fargo Bank, Toronto, ON, Canada. It is also a reseller for these organizations. The company’s head office is located in North York, Ontario,  Canada. INKAS Group’s founder and president is David Khazanski, and its CEO is David Wiseman.

INKAS Payments offers POS systems, mobile payments, and internet payments in addition to processing all major credit cards and debit cards. In addition to smartphone and mobile terminals that can process credit cards, gift cards, and even PayPal, it offers swipers and POS terminals for in-store sales. They particularly promote their price-matching option and free rate-analysis service.

Reduce payment processing costs by a great deal while accepting payments from all major credit and debit card providers with ease.

INKAS Payments Review Based On Rates, Charges, and Agreement Conditions

Currently, there isn’t a lot of information accessible regarding the typical INKAS Payments contract. Since the business is a reseller of Elavon, it is likely that its typical contract closely follows Elavon’s, but it’s also possible that INKAS can change specific contract provisions as it sees fit. With PCI Compliance fees ranging from $29 to $59, transaction fees of 2.65% plus $0.19 (swiped) and 3.15% plus $0.19 (keyed-in), and no termination fees, the typical Elavon contract has a multi-year term. However, given the probability that INKAS works through independent sales offices, it’s probable that different rates and terms may be offered to merchants based on their particular industry, size, and track record.

INKAS Payments advertises its virtual terminal and payment gateway, called VirtualMerchant, on its website in addition to providing storefront payment processing services. However, neither of those services discloses their prices. These e-commerce services often come with additional INKAS Payments rates and expenses, such as gateway fees, technical support fees, batch fees, and additional transaction rates.

Watch out for long-term agreements

Ladco Leasing, Elavon’s leasing division, is infamous for including lengthy, pricey, non-cancelable equipment leases in Elavon processing agreements. A five-year lease through Ladco was cited in one INKAS complaint, which suggests that some of the company’s merchants may be stuck in pricey leases. In light of this potential outcome, the company’s grade has been reduced, in part because Ladco has one of the lowest CPO ratings. Check out the top merchant service providers if you’re a retailer.

Based on customer reviews, ratings, lawsuits, and objections

On these and other consumer protection websites, we have found over 30 negative INKAS Payments reviews, some of which call the business fraud or scam. By far, the company’s telemarketing strategies are the subject of the most frequent complaints from merchants. INKAS allegedly continued to phone even after being requested to stop, and some business owners even think the calls came from an INKAS agent pretending to be their current processor.

Undisclosed costs, unfavorable contract terms, and subpar customer service are mentioned in other, more recent INKAS Payments evaluations. Despite having comparatively few complaints through the typical routes for merchant services complaints, the company has received a grade of “C” in this category due to the type of complaints that have been made.

There are no pending class action lawsuits or FTC complaints against INKAS Payments that we could find. Disgruntled customers who want to take the firm to court should think about reporting the corporation to the appropriate regulatory bodies.

Profile of the Better Business Bureau

INKAS Payments Corporation has been recognized since 2015 and now holds an “A+” rating from the Better Business Bureau. The firm displays 4 complaints that were made in the previous 36 months. Two were a result of issues with marketing or sales, and two were issues with a good or service. The company only rectified 1 of these 4 issues to the merchant’s satisfaction. The remaining 3 either received no final response or were resolved to the merchant’s disappointment.

INKAS Payments has also received 15 unofficial, all-negative reviews, in addition to those 4 complaints. It should be noted that unlike with complaints, the BBB does not verify unofficial reviews. The company is accused of not cancelling an account and of continuing to charge in the most recent review:

Furthermore, a small number of customers have accused the company’s salespeople of being pushy.

They have, however, received a few positive feedbacks on the way to sites like https://www.trustpilot.com.

“They have high-caliber equipment for all kinds of businesses. INKAS Payments is your business if you need assistance in reducing your fees. They are a business you can trust, they have quick fund deposits, and they are knowledgeable in the sector!”

“We’re happy we have moved to INKAS Payments. With the support of their personnel, the setup was simple. I’m now making monthly savings.”

Performance of “B” Rating:

We have changed the BBB’s rating for this evaluation to a “B” based on the company’s complaint rate and resolution ratio.

INKAS seems to advertise its products primarily through telemarketing, strategic alliances, and independent agents. Numerous INKAS Merchant Services evaluations mention aggressive, unwanted phone calls to merchant locations, indicating that the company’s telemarketing in particular is a big cause of annoyance for business owners.

Many times, merchants report being unable to stop the calls by making polite pleas, and some felt the need to act rudely to do so. Additionally, several INKAS complaints state that the caller from INKAS tried to trick the merchant into thinking they were the business’s current processor (a highly unethical practice known as “slamming”). Compared to our ranking of the best credit card processors, this is subpar.

The telemarketing reports are concerning enough to reduce the company’s ranking to a “C” at this time, even though we were unable to locate any INKAS complaints that identify misleading practices used by the company’s in-person sales team. We advise getting an independent statement audit to look for hidden fees if you believe INKAS is charging you unauthorized fees.

In our INKAS Payments review we found that INKAS Payments is rated as an average credit card processor by our grading system. Numerous complaints have been made about the company’s sales techniques, and it appears that its contract and leasing terms through Elavon are not particularly favorable.

INKAS’s rating in this review can be raised by lowering the volume of complaints that have been made against it. Merchants are advised to thoroughly examine all of the company’s documentation and to contrast its prices with those of the best Canadian merchant account providers.